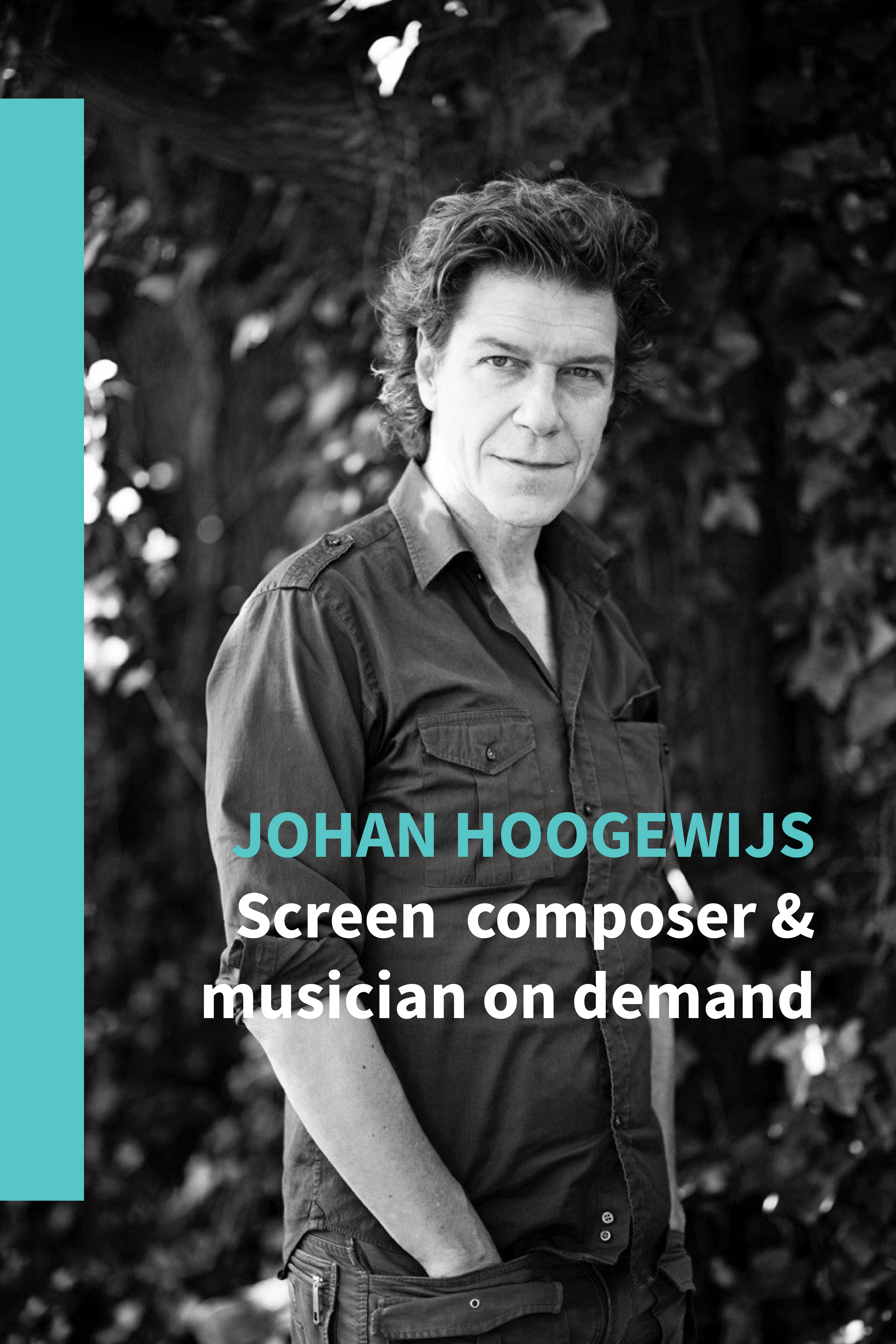 The term ‘performing artists’ is a very large umbrella, it does not stop at session musicians or  screen actors. Who are the members of PlayRight? Johan Hoogewijs is as a screen composer. His assignments allow him to alternate all kinds of projects and as he often records his compositions himself he is entitled to neighbouring rights. How did this come about?

Most of my works are film and TV assignments, theatre and dance not as much. After six or seven years of making jingles for radio icon Jan Hautekiet at Studio Brussel, I started composing for fiction series, such as Langs de kade, Niet voor publicatie, Heterdaad… In the Netherlands I was worked on a number of series, but also on seven films, such as Bloedbroeders (Blood Brothers) by Arno Dierickx (2008) and Het leven uit een dag by Mark De Cloe (2008). The tax shelter introduced me to a number of foreign productions, such as Heute bin ich blond (The Girl with Nine Wigs) by Marc Rothemund in Germany (2013) and recently Le collier rouge (The Red Collar) by Jean Becker in France (2018).

What does a screen composer and musician do?

Anyone can ask for my services. I hardly ever compose without a specific purpose in mind, I like to sail where my assignments take me. The result can vary tremendously, from piano or synthesizer to more classical repertoire. I am not marked by a clear signature, like Wim Mertens for instance, but that‘s to my advantage: I can handle all kinds of palettes. The result is always new music, created in consultation with the director and the producer.

How do directors find you?

A director does not always get to choose his team himself. Often, they put up a fight with the producer for a cameraman or an editor, but as far as the likes of composers or set builders go…

In that respect the tax shelter is both a curse and a blessing. Sometimes a co-production is left with some budget, but specifically for people of a certain nationality.  This can either work for you or against you. There are even specialized firms these days, whose only job it is to collect tax shelter funding. Then they go on the lookout for composers, through studios or the recently founded Belgian Screen Composers Guild.

Competitions are common place as well these days. There are houses who will pay you a small amount for a demo, but often this means working without any guarantee of getting paid. If you compete with a hundred other people for new children’s television song you can hardly expect that everyone will get paid. But meanwhile this means investing time on your side, whereas bidders get to reduce the risk of not finding a song they like to almost nothing.

When did you first hear about neighbouring rights as a possible source of income?

Somewhere in the mid-nineties Microcam suggested I become a member. Later this organization merged with Uradex, which was then transformed into PlayRight. Toots Thielemans had already told me he got money every now and again off commercials he had once recorded in Sweden. So I was already aware I could claim neighbouring rights, since I recorded my own music.

For quite some years now PlayRight has handled my files. Compared to music the audio-visual sector always drops somewhat behind and not all countries collect for both. As I gather collecting reliable information is more complex as well. But I know you are working on that and the people at PlayRight make a tremendous effort. Better yet, I can see it as the amounts I am paid rise every year.

There is a genuinely personalised approach. That is why I try to motivate others to join as well. I can’t stand those musicians who scoff at ‘another five euro from PlayRight’. PlayRight and SABAM could have come a lot further by now if their artists where really behind them.

Can you live off your music?

I have been very lucky. The jobs I have done have always come to me with little effort on my side. The phone has just kept ringing at the right moments. I thoroughly enjoyed doing Witse and at the same time it was really successful as a series, with quite some reruns. This financial security has allowed me to take on less obvious projects as well. In this way I have been living off nothing but my music, for thirty years now.

Things come less easy to the new generation. This holds for session musicians and song writers as well. What they get online from Spotify and the likes is peanuts, when compared to what artists used to make.

Do streaming services have an impact on your life in any way?

You have to go through production companies to get to them. You need a network for that, contacts in the right places and preferably representation. Someone at Milan Records, a renowned film music record label, is checking out new opportunities for me on the French market after Le collier rouge.

None of my existing series have been picked up by streaming services either. Of course most of them were VRT productions. They never put much effort into selling their series elsewhere. These days series like Tabula Rasa are made outside the TV network, by external production companies. That’s a different story.

What project would you like to add to your track record someday?

My own ambitions are not so high that I dream of ending up in Hollywood. Nor would that system become me. But I’m always in for a good art-house film, or a well-made Scandinavian series. Or a grand costume piece, in which I can go quite large. With music that matters, and a theme that has a career apart from the film. That would be something. An old idea of mine for a live project, with four jazz musicians and images by Hans Op de Beeck, has just popped back up as well.