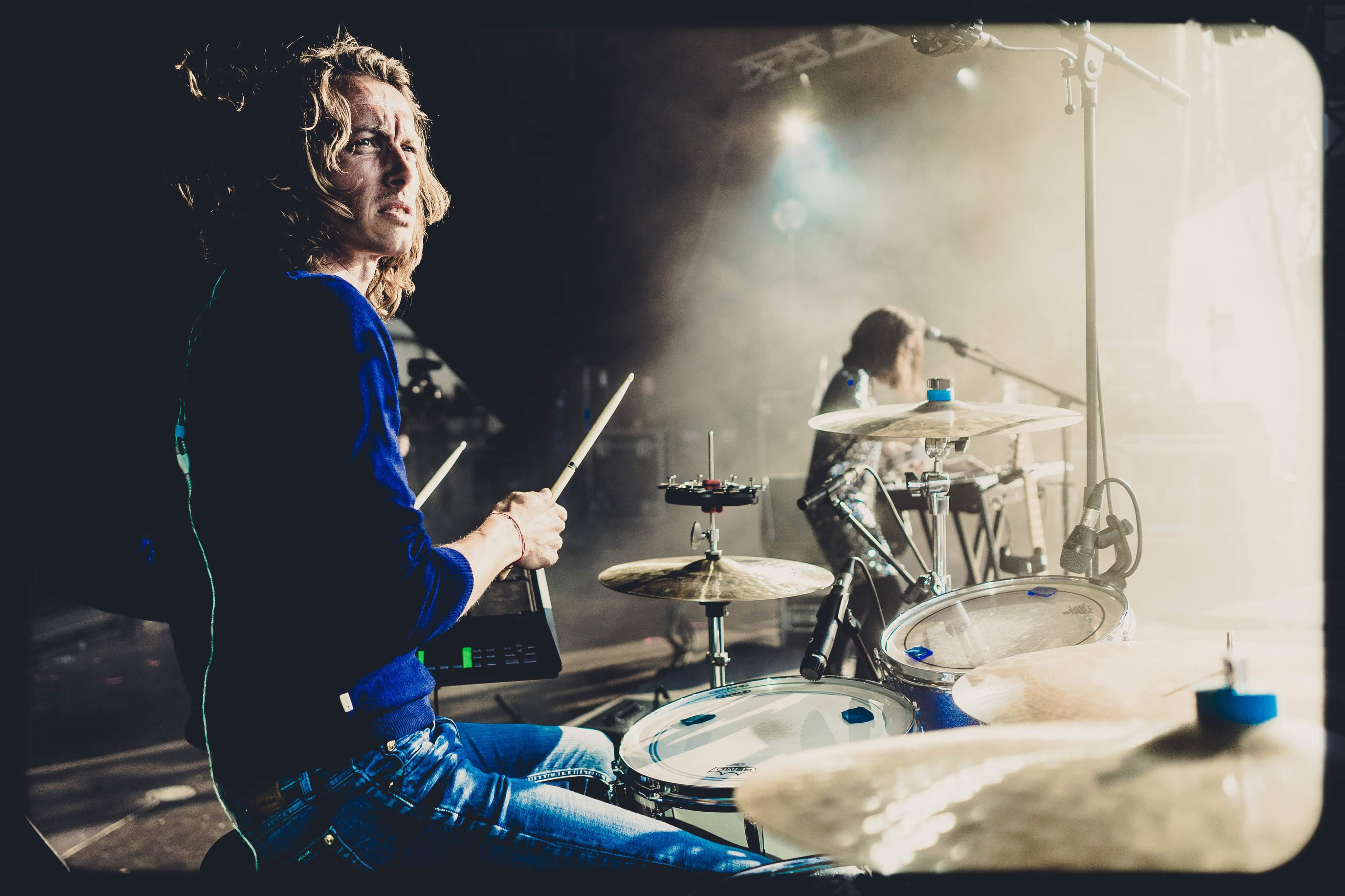 “The instrument adapts itself to the style, the rest is common sense.” So much is clear. But how do you adapt to the music style of a band when you play in four different ones? Not to mention the studio sessions. Professional drummer, Nicky Collaer, pursues a career that is as productive as it is eclectic. This true autodidact and drummer of Alaska Gold Rush tells us more about his course and the greatest assets of a musician who is “on the rise”.

How did you become a professional drummer?

When I was twelve, I started to listen to rock music and play on a drum set that my cousin had given me. I have not stopped since then. I soon realised I should start playing with others instead of on my own, and that is how my first band came into being when I was thirteen or fourteen years old. Everything accelerated when I met my friends from Negate, a hardcore metal band. Our band was quite successful and when I was fifteen, we left on tour for the first time. That was the moment when my passion for music started and grown, as well as the desire to leave and experiment the music scene abroad, not only in Belgium. I then started to evolve more every day and I opened myself up to other genres, such as pop rock and electro rock. Shortly thereafter, I met Dan Klein, who proposed me to play on his tracks and join Vismets. The band was quite busy for a long time and we were able to give several big shows in France and Belgium.

Vismets, Atome, and now also Alaska Gold Rush, Kid Noize and, more recently, Les Garçons… Plus your studio sessions. How do you manage to accumulate all these collaborations?

Well, as a musician, and more specifically as a drummer, it’s important that you diversify. At a given moment I became aware of the necessity to be able to play different styles and try out as many things as possible, so I really started playing “on the market”. I had known Kid Noize from a very young age, because he was also a part of Negate and because I had played with him during the Joshua era. He invited me to take part in a part of the live tour that ended on November 22 last year, in the Ancienne Belgique. Since he is a DJ, I did not play during the entire set and I intervened with a rather percussive performance. Nowadays, I play with Alaska Gold Rush, more folk rock, Kid Noize, fully electro, and since recently also with les Garçons, where I do the music arrangements.

How do you position yourself “on the market” as an artist?

Social networks are of primordial importance in this regard. But above all, it’s important that you gain experience by, for example, starting a band, talking to as many people as possible, going to many concerts, and meeting as many professionals from the sector as possible, especially those who work in studios. Even though being a studio drummer is not my main activity, as it is much stricter and more methodical. I prefer having real contact with the public and the people. With Alaska Gold Rush we recorded everything live, with guitar and drums and without a metronome. Old school, which was very lively!

And how did you end up with Alaska Gold Rush?

A year and a half ago, when their drummer had left for Australia, Renaud Ledru (singer and guitarist of Alaska Gold Rush), asked me to join the band. Consequently, we started composing and recording together in the studio, and last November we released a first single. As we are a duo, the drums are fairly dominant, which gives me considerable space and freedom. The album will be released with a live presentation at the Botanique on the 8th of March 2020 and we will tour through Italy until mid-December. The visual aspect is very important for Alaska, which is why, as a band, we have put a lot of effort in making various clips.

Earlier you were talking about Les Garçons, could you tell something more about them?

Les Garçons form a trio. We started doing music arrangements for Live Magazine, which is some sort of living diary. In fact, they organise events where authors, journalists, directors, photographers, etc. follow each other up on stage to tell a story. Every two weeks before such an evening takes place, we receive the topics that will be discussed, and we get carte blanche to create music introductions that need to introduce each speaker individually. Out of this collaboration with Les Garçons, a new project, a new band has emerged. We are currently collecting our best creations to make a couple of tracks, and on February 2020, we will be giving our first concert at the Maroquinerie in Paris. Regarding the compositions, we go from rock over something more intimate or acoustic, to certain sound spheres, and to end finally with electro. And because we have met many artists as part of Live Magazine, we are doing a collective spectacle with a lot of invitees!

How do you adapt to the music colour and style of each group you collaborate with?

First of all, you have to be quite open-minded and have an extensive knowledge of music. With Kid Noize I play electronic drums. With Les Garçons it’s rather about searching for different sounds, and I also have a pad to broaden the music spectrum. For Atome, it was different again. In fact, it is fairly easy to adjust and adapt, as long as you prepare yourself well, you know how to play electronic or acoustic drums and you can handle percussion. The instrument adapts itself to the style, the rest is common sense. One cannot misrepresent the work of the artist. Learning to understand and appropriating all music styles is my passion. Being able to do everything in order to play anywhere.

What advice would you give young drummers that have only just commenced?

Nowadays, a drummer must be at the same time sound engineer, be able to record himself and know how to work with various programmes. Moreover, to be able to work with all kind of styles, he must integrate electronics, and therefore have a good command of various computer tools. It’s important to know how to manage with computer n stage and know how to handle possible bugs while in the middle of a show. We live in a world in which we can make and record tracks with musicians who are positioned all over the world. In short, you need to have the ability to be a musician and technician at the same time, and to engage in personal branding (laughs).

All these collaborations lead to a busy schedule and various tour dates. Do you have a manager and/or booker who organises everything for you?

It is of vital importance to be perfectly organised. A lot of calendaring is involved with concerts and rehearsals. If you stick to it, you do not necessarily need a manager. More interesting for me are the shows, so a booker who could arrange new sessions and live performances would be more useful. Another thing that should not be neglected is the word of mouth… Music is a network. Fundamental given: never give up, be hyper-rational and loyal to the people who have confidence in you.