From collection to distribution: what happens with the equitable remuneration ?

Collected by Unisono, the equitable remuneration is then paid to musicians and music producers via the collecting societies that represent them: SIMIM (producers) and PlayRight (performing artists).

Specific to music, this remuneration is therefore entirely reserved for music performers: Once a payer pays the equitable remuneration for a given reference year, this amount is being collected per year (“Music 2016”, “Music 2017”, etc.) and put aside for music that has been broadcast, exploited and/or sold.

Good to know: During a first distribution, we often notice that not all artists have declared their recordings. That is why PlayRight uses virtual castings, taking into account the number of all (potential) artists that might have contributed to a recording, also those that have not yet declared their repertoire. During the first distribution the rights of these artists are being reserved.

Three years after this first distribution, the final distribution takes place. The rights that have been reserved for artists during the first distribution, based on the virtual casting, are then being paid and divided amongst the real cast. Those who have not declared their repertoire for a given reference year after three years, will not be able anymore to collect their rights for the same year.

PlayRight closes the distribution of music rights for 2014 at 7.2 million euros 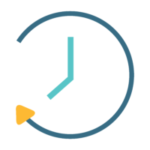